Members of Spring Lake Yacht Club enjoy a great season packed with fun parties, awesome sailing and lots of time with good friends. For over 120 years, Spring Lake Yacht Club has provided its members the opportunity to sail, swim, socialize, grill, dance, eat, drink and be merry; and we’re just getting started.

Among Spring Lake Yacht Club’s many amenities is our clubhouse, which features kitchen, bath and shower facilities. Kids love the sandy swimming beach with playground equipment, the basketball and volleyball courts and the horseshoe pits. SLYC also offers launch ramps and extensive dockage.

Membership at SLYC is exceedingly easy to acquire. All it takes is a willingness to have fun and meet lots of new friends. Then, it’s as simple as dropping your completed membership form (found here) and payment in the mail, addressed to us of course.

Our social committee has planned tons of fun social events throughout the entire season and the racing fleets are tuned and ready to live up to their reputation as some of the best in the country. Come join us for an awesome summer! Get on it, summer will be here before you know it.

As early as the 1870s local residents enjoyed viewing regattas put on by the Grand Haven and Spring Lake Rowing Associations. The shores of Spring Lake were lined with spectators watching the four classes of entries compete: Double Sculls, Six Oared Shells, Barges, and Junior Single Shells. Among the entrants from time to time were the Chicago Scullers, the Chicago Athletic Club, the Grand River Boat Club of Lansing, the Detroit Boat Club, the Excelsior Boat Club of Detroit, the Farragut Boat Club of Chicago, the Pilot Rowing Club of Grand Haven, and the Spring Lake Boat Club. The only local winner in these regattas was H. W. in the Pater shell Millie. 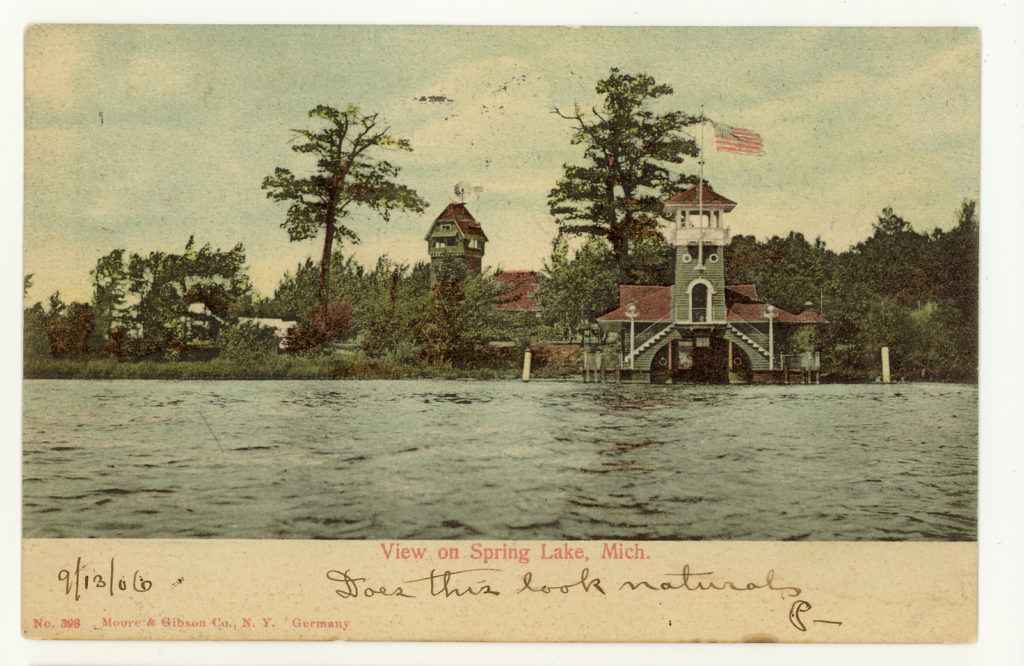 Pearson, competing for the first time, won the Junior Single Sculls. These activities set the stage for the Spring Lake Yacht Club. Formed in 1897 with William Savidge as the first Commodore and George P. Savidge as Secretary and Treasurer, the Club had 47 boats registered the first year. The two Savidge brothers owned a 55 foot schooner, the Sallie, built by William Barrett, which was the Yacht Club’s first flagship. 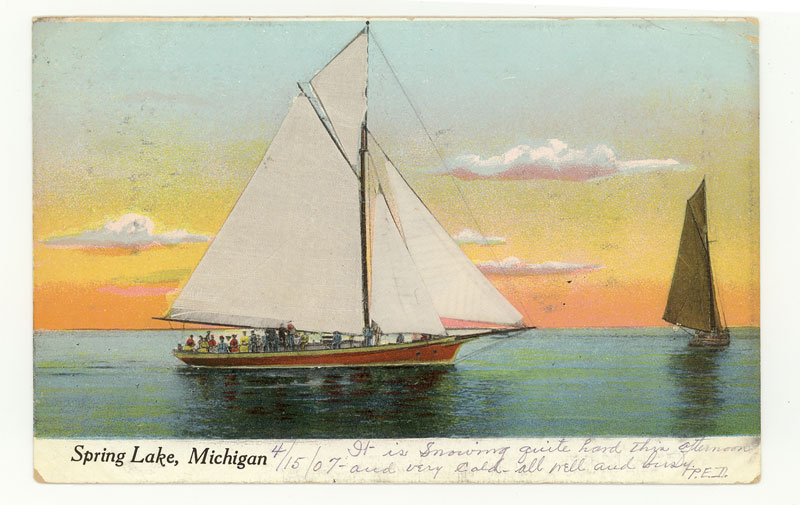 Other charter members included William H. Loutit, Nathaniel Robbins, Chauncey M. Blakeslee, William Barrett, Len R. Patterson, James P. Armstead, George Wyman, James Campbell, and Lloyd Buckley. Barber School, which had been moved from the southwest corner of Park and Mason Streets in Spring Lake to the Savidge property, was used as the first club house. In 1914 motorboats were accepted as a legitimate part of the Club’s activities.

The first Yacht Club race was won by Rev. David Spencer, sailing a boat owned by local contractor Chauncey Blakeslee. In 1905 club members acquired seven 28 foot Class B sloops, which represented the state of the art in racing at that time. The seven boats were precisely alike, putting the burden of winning on the crew’s skill. The boats were rigged and fitted by William Barrett at a cost of $500 each. 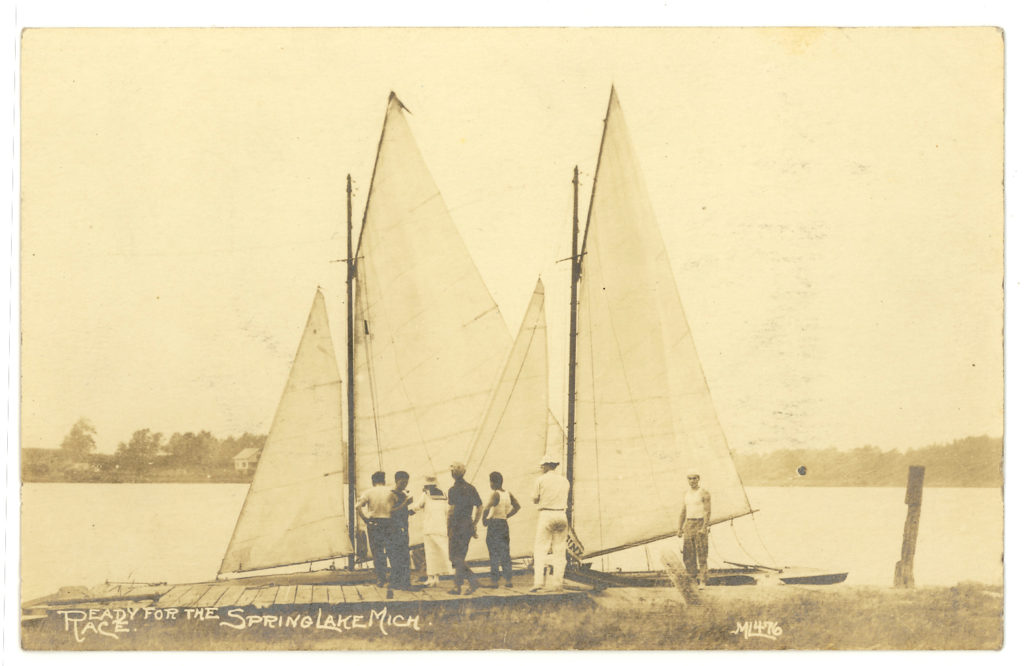 A Yacht Club booklet published in 1903 described Spring Lake this way: “Pure water. The Lake has an Outlet. Sewerage is forbidden. The ice taken from this lake has been tested by the Board of Health of Chicago, and received its approval. The bottom of the lake is black, and therefore cannot be seen through the water, but clear water over a white sandy bottom, showing its full depth, may not always be pure, as appears from the fact that ice taken from some of the Wisconsin lakes has been condemned by analysis. No sewage is allowed in Spring Lake, a statute law forbids it. The water is kept pure as its source by a daily discharge into Grand River. Deadly evaporation is not its only drainage, as in land-locked lakes with no outlet.”

The same booklet listed 27 entries for the 1903 regatta, including 13 from Spring Lake, two from Grand Haven, five from Grand Rapids, six from Chicago, and one from Saginaw. 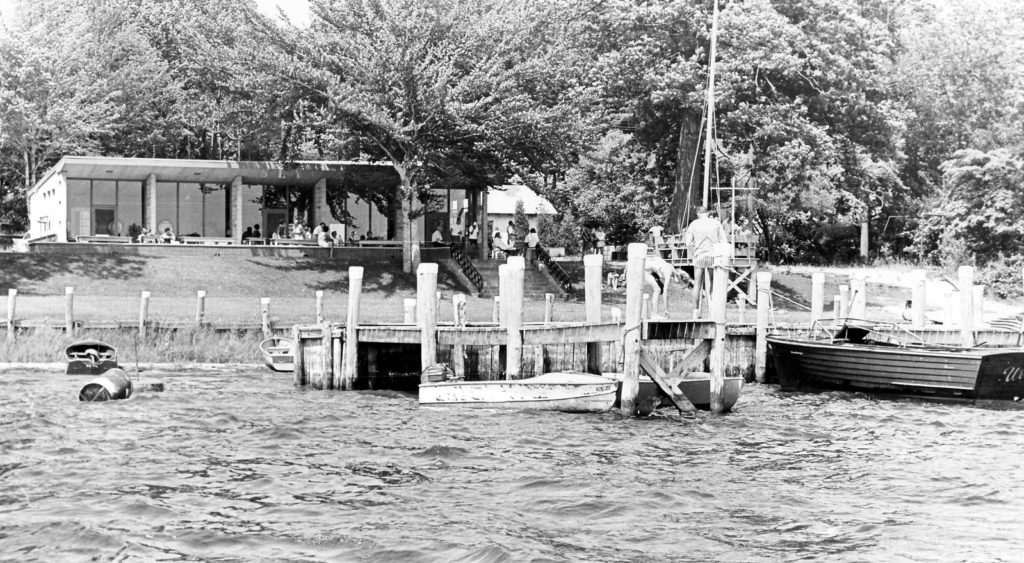 In 1931 the Club acquired use of the Thum property on the north side of Spring, somewhat east of Smith’s Bayou. Eventually a new clubhouse was built.

If you are buying or selling a boat, please check out our classified page.